You guys make me smile, ya know that? :) Thanks for all the congratulations!! Let me try to run down some of the questions.

Yes, the new boyfriend does read my blog, but no, he's not a blogger. He's actually a bit shy. :) I don't know if he's coming with me this Sunday to the party. I guess it depends on if he can log in that afternoon. [RL comes first, of course!] Although he might, if he doesn't fall asleep early since I kept him up WAY too late last night, be coming to the party we're having at The Viper Pit tonight. No, he's not going to cut into my shopping time because I'll just drag him with me if I have to. :-p Yes, Cen, we'll be needing the bananas most definitely, and yes, Tymmerie, send the SLondoms over right away! :)

So last night since I was too excited to sleep, I finally made my way over to Archange. It was almost strange going in there because I kind of expected to see all the Last Call stuff on the walls. There was only one other person in there wandering around, which I kind of thought was odd since the night before I think they crashed or almost crashed the sim for the opening. Looking around, I noticed 2 things. 1, the outfits are very Last Call inspired. And 2, it's kind of pricy. I'm not really well acquainted with the whole "couture" thing in SL, so maybe it's average, but the lowest priced outfits I saw in there were $295L, and for those of us who delight in dressing as great as we can for as cheap as we can, it's kind of sticker shock. I did end up buying an outfit, so I ran over to my store to take a picture of it. [Btw, upstairs in my store where the Tasty Packs Cen & I put together are, I have a posestand against a black background. Anyone is welcome to come snap a pic of themselves if they want to. I don't know if I've ever mentioned it before.] 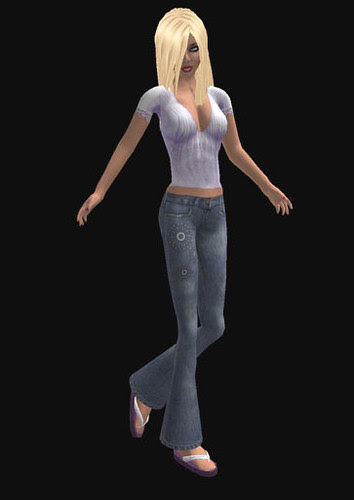 This is called Lesya, and is one of the "cheaper" outfits in the store for $295L. I ended up editing the prims on the jeans because they were super flared and looked ridiculous on my frame. The jeans are what drew my eye to the outfit in the first place, since I like the design on the leg. In terms of quality, this outfit is pretty much perfect. I wouldn't have expected anything less. However, I don't know if it was really $295L worth. 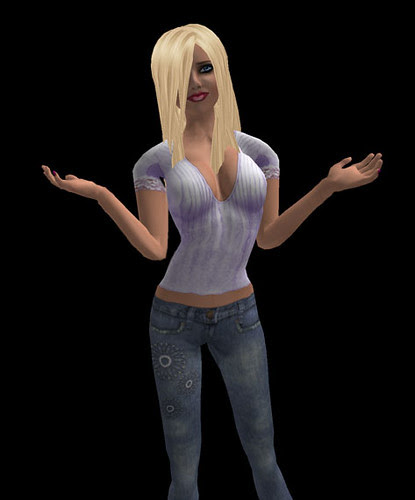 It's not that I can't afford outfits from there. It's just that I'm not sure if, for me personally, it's worth it. Great clothes, though. :)

Viper Pit Party tonight!! [SLurl] It's Best In Red & Black, I'll be the DJ for it, and I hope you guys come out to have some fun! I'm looking right now for some stuff for the party...raffle balls or trivia or something fun. Not that we're not fun just on our own, of course. ;) But I always like games and things.