You can stand under my umbrella

I was telling Levi tonight that I couldn't think about anything to blog about before heading to bed. Ha. I forget sometimes that I can make a 5 hour story out of a 30 second visit. :-p

I am officially OFF for the weekend. No events to host, no parties to DJ, nothing. Just 3 days to hang out and do nothing but have fun. Not that events and parties aren't fun. :) I'm not saying that at all. But there's a certain amount of pressure when you do that to make sure everyone's having a fun time. Of course, sometimes you just have fun on your own...like when someone stands still for too long and you run and jump on them. 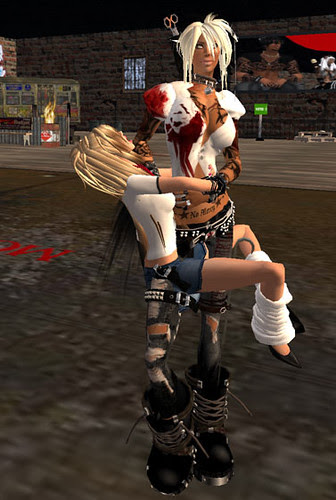 And Levi got to do the "Official First Boyfriend Appearance" tonight at the club. LOL I was almost scared for him because people can be a little overwhelming at times. But no one was totally crazy and it was an 80s party, so everything has to be great at an 80s party, right?? But it was loads of fun and he actually likes dancing, which of course makes me like him even more. ;) After that, we headed over to listen to one of my friends do his first SL DJ set. It was pretty fun! We even got to hear some of his original songs, which was awesome because I had no idea he was so talented!

And then...it was of course cuddle time. :) I kept Levi up again WAY too late. It's a bad habit of mine, but I just can't seem to help it. Especially since he's incredibly easy to talk to, whether we're type chatting or voice chatting. And here ya go, Quaintly. A better pic of his face. :) So after I FINALLY let him go to bed, I hopped over to pick up a free gift from a store and forgive me, but I can't remember the name of the store right now. If you look in the Fab Free blog, you'll see it. One of the gifts in the box was a cute umbrella. But that got me thinking. Why is the weather in SL so freaking consistent? Why don't we have freak storms and earthquakes and stuff? What's the point of an umbrella if it never rains? I did a quick search and ended up at a place called Tornado Island. There's a demo HUD there [you don't wear it, it's on the wall] and you can summon a tornado!! Check it out! 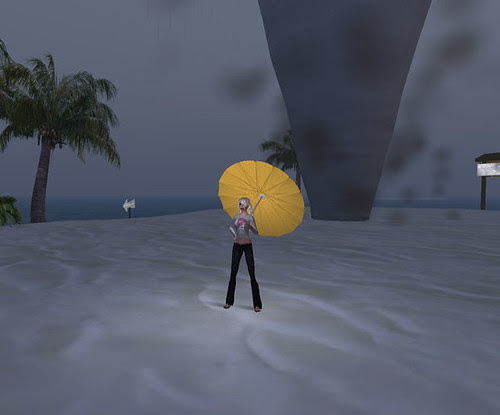 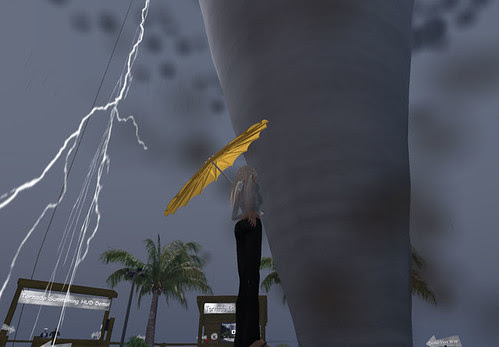 I don't think my little yellow umbrella is gonna save me. I had to go out there twice, actually, because the pictures from the first time just looked ridiculous with the sky blue and the ocean shining and clear. LOL The sky I'm using is the Blizzard preset. I thought it worked well.

Wow, for someone who couldn't think of a thing to blog about earlier, this is a long post!!

Posted by Alicia Chenaux at 1:59 AM

Yay finally a glimpse of his face! *giggles* You guys look so great together :)

OMG - you guys are adorable!! How does he feel dating a SLebrity? When are you going to do your post about trying out sex furniture together?

Aww, thank you, ladies. :) And I'm not exactly sure how he feels about dating a SLebrity, Tym. Although we did have the discussion of what it would take for him to do to make me really tear him apart in my blog. LOL I'm sure that's a concern for everyone who dates a blogger!