I was going to post about trying to find some ponytails today, but that post got sidetracked because I saw a fashion disaster, and then that reminded me that I have other fashion disaster pictures, so the ponytail post will have to come later.

First on our parade is this woman who showed up to click on the money bag at my club.

First of all, what's with the boobs pumped up to 100? Those look completely painful! Second, is she the hunter or the prey? I mean, animal print on her outfit and camouflage boots. Seems a little odd. Not to mention that outfit is terrible. Then, of course, the bling. Bling on the boots, bling on the belly ring, bling on her necklace. No. No. No.

Next up, I saw this unfortunate girl at a store last night. Her friend's outfit was almost as misguided, but not enough to really make the list. 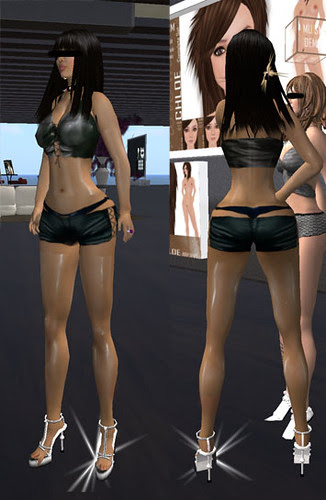 I had to do a side by side picture [although it looks like there's two of them, since the floor matches] because look at her ENORMOUS HIPS. She wasn't a watermelon ass, thankfully, but what is wrong with women who torture their shape like this?! Those aren't child bearing hips. Those could lay out a baby elephant. And check out the body oil seams. You see, she wanted to make damn sure we all saw her thong, but that meant that the oil that was supposed to go on the underpants layer wasn't going to happen. I suppose we should be glad that huge rear end isn't slick? Then, of course, those horrific shoes that I hate so much.

Last up on the menu was the inspiration for this post. I saw her today and almost dropped my drink.

I understand being new. I don't understand this get up. Unless she's colorblind, of course, in which case she may not realize she's wearing an orange plaid skirt with some kind of green halter top. I won't even mention the texture necklace, bike shorts, and whatever that is on her feet. Hopefully she was taking advantage of the freebies at that particular store because I know they are good ones.

I'm not saying that I have the best fashion sense in the world...but wow. Sometimes, I just see things that make me scratch my head

OK...I bet a gazillion-bazillion dollars that the person behind the body oil seams and obvious thong look is a man in RL.

The funny thing is that I always thought those types of shorts were supposed to be worn sans undies - hence the "sexy" open lace up sides. But they wear undies anyway? that is like wearing a tube top with a regular bra on underneath. Less is more, people!!

I thought that she might be a he, too! I just can't see a real woman looking like that in public. But then I thought about some other women I know...and so it's hard to say. :-p I believe that thong comes with that outfit, because I've seen it on others before. I still don't know what purpose it serves, other than to cover up the butt crack. But showing crack is the least of this person's worries at this point.

If you ever bump into Morpher on the grid, please be kind. Because she's most likely gonna be wearing something outrageous too (something that Quaintly wouldn't wear in a million years!!!) :P