I was shopping around last night, and getting a bit fed up because I couldn't find anything new. At least, not anything new for me. So I went home to set up my new Pillow Talk pillow [I believe at some point I'll have every couples pillow from there!] and then I laid down to do a little SLX browsing for something cute and sexy to wear to bed. I saw a picture of a cute little set, and it was so cheap I immediately had to search out the store in-world.

Tesoromio [SLurl] doesn't appear to be a really new store, and in fact when I typed in the name of the store in my inventory search [the only way I can find things most days], I had a gift from there from FashCon Day already and had never opened it! There's just such cute and mostly casual items there. And talk about inexpensive! Look at this darling black dress I bought for just $90L. 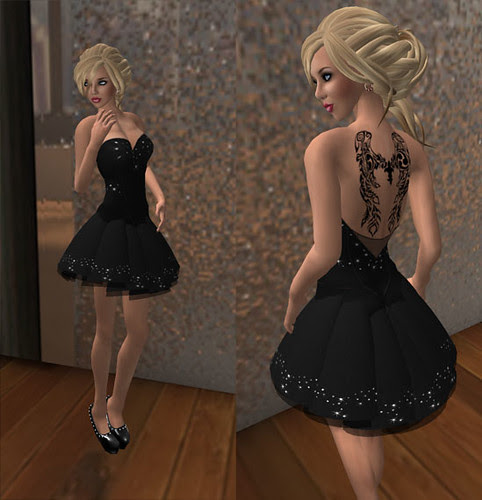 Isn't it cute? It came with stockings and long gloves, but I didn't feel like wearing them. It matches the free shoes from Fuel I got at the Ravenwear hunt just perfectly. Btw, those shoes have an ARC of about 200, which leads me to believe that sculpties are killing SL. I'm just throwing that out there. Cute shoes, though.

Oh! Sorry to cut this off in the middle of my store talk, but I got to meet QueenKellee yesterday and that *BP Big Bomb hair that is shown in some of the posts at SL Free*Style is an absolute ARC hog! Kellee was just over 1400 ARC when she showed up. The moment she put that hair on, she soared over 4000! So if you wear that hair and you're lagging, take it off!

Back to the store. :) This next set was what I saw on SLX and I knew I just had to get it. I don't have a lot of lingerie or anything, since I was never really home much before and who wears underpants in SL anyway really? :-p But this was just tooooo cute! 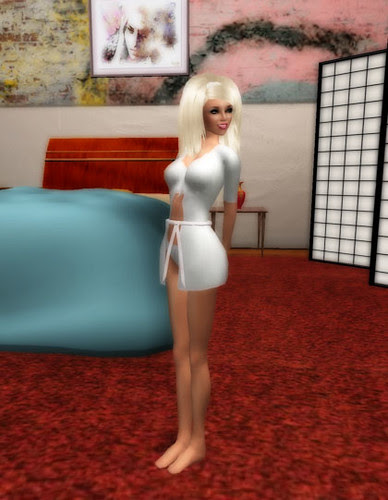 It's the Pink Cotton set and it comes with the bra, panties, and little robe with a belt. The only thing that would make this set perfect is if the panties came on the pants layer so that I could still wear my hip tattoos. I have the tats on the pants layer, but the panties are higher waisted and the tats would be on top of them and I freaking hate when people layer their tattoos over their clothes. But oh this is just the cutest set and it looks so incredibly comfortable! I would love this set in the real world! Levi logged in as I was finishing taking pictures and well...he really liked it too. :) And did I mention that the set is only $30L?

Like my hair? It's the Whitney hair from Celestial Studios. Just another step on my way to making my avatar look more like Holly Madison. :-p 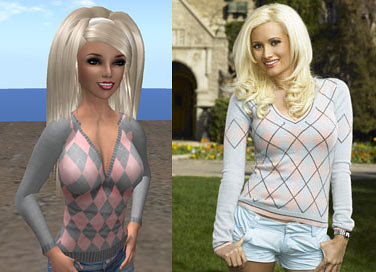 We could be sisters, right? LOL

Ooh, and Stephanie Misfit of La Sylphide sent out demos of her new makeup for the Ingrid skins last night! I absolutely MUST get the Sultry Nude Pink. I've been dying for her to come out with a nude lip because as much as I love the candy pink of my lips right now, sometimes you don't always want a lot of lipstick. I just must get one!

I'm going to go nap a bit, I think. SOMEONE kept me up until almost 7am. ;) 2 hours of sleep isn't going to cut it today.

Posted by Alicia Chenaux at 9:48 AM