So tonight after the trailer trash event [I'll have pics later of that] some of the ladies in the Ch'Know group and I went to Sn@tch to pick up a gift. Well, of course that took some time because we're blind and it's lagtastic out there, and so after I got mine, I had to run and relog. And THAT is where the fun started. LOL

See, SL was restarting 500 regions tonight, but I didn't realize it. I don't read the SL blog every 10 minutes. When I went to log back in, I ended up at a place just marked 'Linden Land.' Me and about 25 other avatars. I laughed, and then logged out and logged back in. Same thing, except this time I landed at Pooley something with about 30 people. 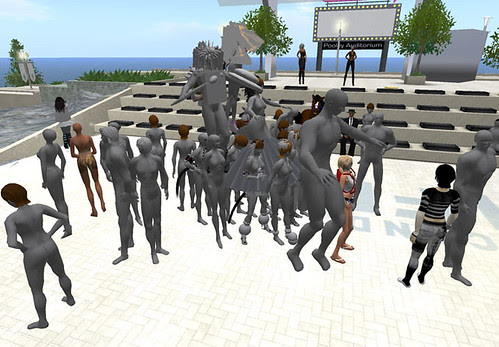 Surprisingly, everyone was in good spirits. No one was really bitching, people were having fun meeting each other and everyone was laughing. There was one asshole throwing grenades, but they weren't grenades that did anything other than try to lag the place. And considering the lag just with the people there, it wasn't a big deal. Man, I just couldn't stop laughing. Everyone was just cracking jokes and being silly. I ended up chatting with some pretty nice people until the sim went down. When I logged in, I ended up at Help Island. Imagine my surprise to see a designer that I admire greatly standing there quietly. So let's play a game! Guess the designer! 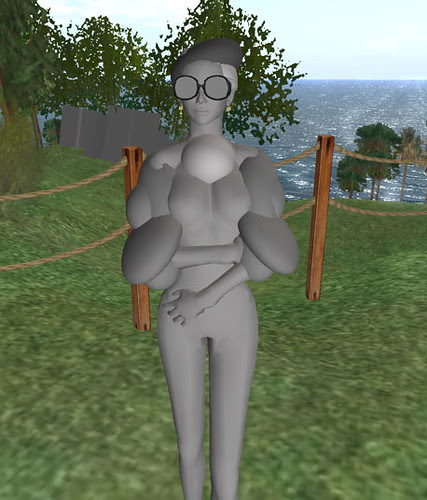 This is a fun game. I think I'll start trying to catch designers ruthed and gray.

I managed to make it over to my store, so I'm sitting here now and will probably stay here the rest of the night. :-p

Still, even with what was really a pretty annoying issue, it was wonderful to know that not EVERYONE in SL is all about the gloom & doom and can actually make the best of a not so great situation. People laughed, made others laugh, and made new friends. And isn't that what it's all about?

lol, stuff was jacked up last night. i'm happy i stayed on my own place doing inventory control. i took a picture in the pineapple hat!

That MUST be the the silhouette of a Lu sister?

Hey Alicia, I just found this... a skin for the Dazzle viewer to give it the ol' classic look once again!

Kristianne and I are thinking the same thing!...course I wouldn't begin to know which Lu...

of course she looks fab even gray...*le sigh*

Aisuru - What a cute picture!! I was going to just sit and sort inventory while I was stuck in that place, but I was laughing too hard to see.

Quaintly - You're a star! I'm going to give that a try and see if I don't mess up the whole thing. If SL suddenly goes up in flames...um, it wasn't me. :)