Feel the wind through my lashes! 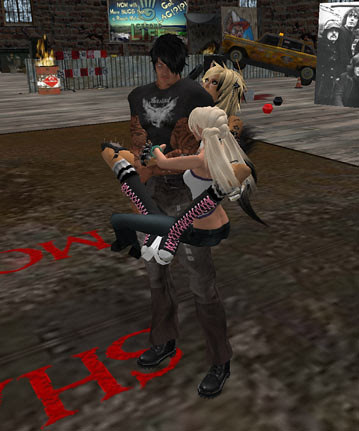 It's not a good thing if you go AFK at my club. You might end up with two girls on you. Hm...I guess for some guys that's not a terrible fate.

I hit up the hunt over at Haute Couture tonight. Either I'm just a REALLY bad hunter, or these gift boxes really were just that tiny. lol I didn't find everything that I've seen in blogs, but I don't really mind all that much because I really only went over there because Creamy had blogged that caLLie cLine had those biiiig eyelashes there. They're not in a giftbox, but a pair of them are only $1L at that location. Not sure for how long, though. I was really excited because I've been dying to try them out, only I couldn't justify to myself spending them money on them just because they're so wild and I don't dress wild very often. 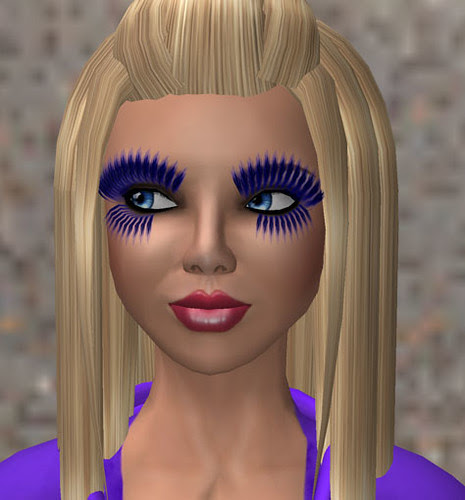 They are cool, don't you think? I know people have been calling them lashes for drag queens [which, truthfully, I know a couple of guys that would go WILD for these in RL], but I also think they're fun for parties. I tinted these ones blue. I need to get in there and resize them a bit for my eyes.

Bah...looking at Freestyle again, now I want to go back and try to find some of the outfits from the hunt. Maybe a few more people have cleared out so it won't be so laggy.

Ok, so a lot of people have been saying that they just don't understand why avatars look so pixelated with the new viewer. This gem is due to the new "Avatar Impostors" that you get with the viewer. It's supposed to help with lag, but quite honestly, I never did see a difference with them on or off, and having them on annoys me. If you want to turn this option off, go into your Preferences, and hit the Graphics tab. Make sure the box next to Custom is checked. This will bring down a whole bunch of options. In the lower left hand corner, under Avatar Rendering, uncheck the box for Avatar Impostors. And poof, no more pixelated people! It's always good to leave the Custom box checked, this way you can change your draw distance. Remember, the higher your draw distance is, the greater your lag is probably going to be. I keep my draw distance pretty low normally. It's very rare that I feel the need to have it over 128m. Usually I'm at 64-96m. For my purposes, it suits me fine. :)

Blah, ok. I have to go back to the hunt. At least for the RFyre outfit. Then it's off to bed, since I have to get up early-ish for once.

Posted by Alicia Chenaux at 1:11 AM

omg, that hunt was lag tastic! i took off all of my prims besides hair (not going bald for no one!) and i'd see these chickies rockin the huge skirts and blinged out boots, i just want to smack them! oh well... I think I found most of the teesy boxes, but they were absolutely tiny, smaller than a bracelet-and they were the last things to rez in for me. that and you had to use camera tricks to find some of them. oh well, I had fun. still enjoy reading your blog.

The lag WAS really bad out there! I had to tp in, run around trying to find a couple of boxes, then run home again to "de-lag" myself, and then go back again. I REALLY don't think some people realize how to go to these hunts and sales.

Don't worry hon, those boxes really WERE that tiny. But what a cool sim! I'm usually very cursory during things like that because of the masses (you know, go in bald and in comfy shoes, find what you need and get out before the bling monsters eat you) but I had to stop and let things load so I could admire the place a couple times.

I didn't bother with the hunt... increasingly the lag is just not worth it to me :( Plus I didn't have the time this week - RL issues, bah. Don't you hate it when RL interferes with your SL? :P