This time Sioxie Legend of SecondWave Apparel [SLurl] has been hit. You can check out her blog to see the whole story, but basically someone ripped off her leather vests and is selling them. :( So Sioxie, who is doing a very classy thing [in my opinion] of not posting the SLurl or name of the store in question as to not give them ANY additional traffic, is selling all of her leather vests for $5L per pack. The leather vest sets are a mere $25L and include the mini skirt, cami and vest.

She's putting them up on SLX and OnRez as well, for those of you who do more shopping on those sites than in-world.

I hate when I see the designers being hit like this, but I LOVE when they don't just throw up their hands and whine and threaten to leave. I love when they stand up and do something about it without trying to turn it into a hysterical mob scene. [Not that the mob scenes aren't without their amusement at times.] So anyway, go pick up the vests. The pic of them are on her blog, and they're pretty cute. :)

EDIT: See? Cute! This is the black leather vest set, and I'm wearing it with the pink lace cami that was included. I bought another set in pink, and then a pack of just the basic vests. Heck of a deal for $55L! 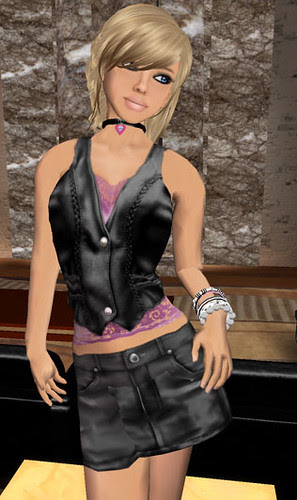 Posted by Alicia Chenaux at 1:24 PM

I love Sioxie's work and I think she gets even *better* all the time. And she was classy about what happened to her. Go her.