Poll Results & We Can't Stay Away From Poles.

I noticed a few days ago that my poll on changing clothes closed, but I haven't had time to talk about the results. To the question "How often do you change clothes in SL?" there were 31 votes. Out of those 31 people, 15 people change 2-4 times a day, 10 people change their clothes just once when they log in, 5 people change more than 5 times a day [I'm one of those people], and 1 person didn't realize that they could change clothes. [Very funny, Mr. I-Think-I-Know-Who-You-Are.]

I sat today and worked on the Tequila Belt for a bit. I managed to get the bottle, shot glasses, lime wedges, and salt shaker finished. I'm working on the actual belt part now, as I want to make it a bit different than the existing belts that I have up. Not quite sure how I want to do it so that it's unisex, but I'll come up with something. The biggest problem I have, with any belt, is how to attach the items. I think with the bottle I may make a little basket and attach it with rings. The shot glasses & salt shaker will just be in little holders. But the lime wedges are more of a problem. I'm *thinking* a plastic baggie, but then there comes the issue of how to make the bag. We'll see, I guess. And of course, since Mr. Paine was the one who gave me the idea for the belt, his name is going to be on it somewhere, just like Cen's name is on the mouthwash on the Bad Girl belt. :)

Speaking of Cen, we went to Bare Rose tonight and oh my god, I've said it before, and I'll say it again. It is almost impossible to shop there because of the lag! But we did shop anyway. :) I ended up with 2 outfits, one of which I looooooooove! 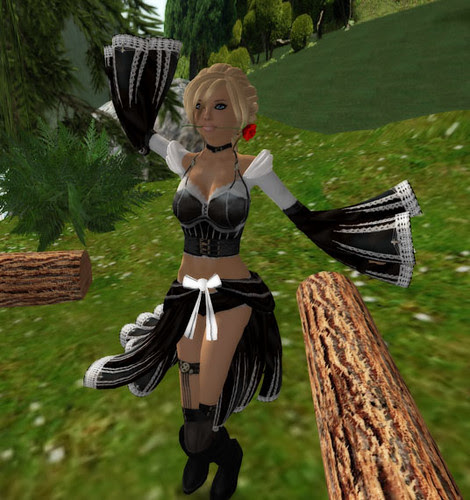 Such a fab deal for $140L, because it comes in 3 colors and there are 2 skirt options. I'm wearing the long skirt in this pic. I think I'm going to wear it Thursday night for the Pirates & Wenches contest I'm hosting. Minus the mouth rose. lol I also bought a kind of poofy medieval type gown that came with 3 or 4 colors.

Oh, and Cen and I can't seem to stay off poles together. 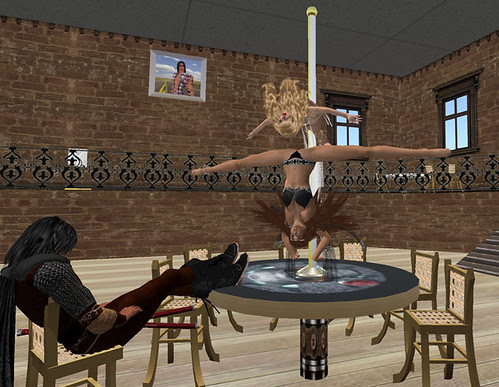 We DID have silks on, but they're the clicky kind, and well, they got clickyed right off. :-p [That's Cen's guy Rick sitting there. We weren't dancing for some random man. Rick's a bit of a watchdog, and he said we're not allowed to be strippers. LOL]

I need to write up a classifed ad. I don't know what to say. "Come to my store. I got some cheap crap you probably don't need." That probably won't cut it, huh?

Posted by Alicia Chenaux at 1:27 AM

oh you gotta send me a tp for your contest! ^^ Would be so much fun!