I can't tell if I had a productive day or not. In a way, I did, I guess. But I slept really late, so it felt like I was trying to play catch up all day.

I think I can finally talk about this now that it's pretty much done. A little backstory on this is necessary, though. You see, Cen is a noob magnet. :) She just is. No matter where we happen to be, the noobiest person in the room will gravitate towards her. As such, she's learned that a lot of the starter kits that are around SL really aren't TOO helpful when someone doesn't know what's going on because the kits contain a million things - weird clothes, notecards telling people what to do when sometimes they don't know how to even OPEN the notecard, landmarks to unfamiliar stores that don't say what exactly is at the store, etc. So she had the great idea that we should put together avatars that are just ONE complete look. I thought it was a brilliant idea, so the other night we hit up a bunch of stores that have mostly full permission freebies and we got to work. We ended up with 9 avatars - 7 females and 2 males. Each pack has everything that is shown on the box, and a walk attachment. All they have to do is put on everything in the pack and voila! They no longer look like they just walked off of Orientation Island. There are different personas, like a cowgirl and a vampire lady and others. The upstairs of my store has been dedicated to the packs, and I put some posestands up there too so people can play with their items, even though everything has been resized to fit each shape.

So that's what I did today when I logged in. By the time that was all done, it was almost time for my event. Of course the DJ didn't show, but I was told last night she may not be able to be there, so I was set up to DJ it myself. One of our new DJs tried to tell me that she'd already said she was going to DJ it, but I don't KNOW her and I wasn't told anything about her DJing my event. I also had said last night that I'd be DJing it myself. The girl put on her Poutypants and went to one of the bosses, who then later told me I was totally right to just go about my business and DJ like I said I would and she'd have backed me totally if the new DJ had tried to start anything. lol We have scheduled shifts, and it's just kind of known that if I don't have a DJ, I do it myself. If she'd talked to me in advance and asked if she could do it, I probably would have said yes. Putting on her Poutypants and telling some new guy "Well, guess you'll just have to wait to hear me DJ" didn't sit well with me at all. But anyway, it was a pretty great set. I got a ton of compliments, which of course thrilled me to no end. Sidonie and her Mr. Coolname even showed up and they won the contest! :) Plus we got to see how smart Sid is as she cleaned up in trivia.

After that, I decided to go out to the sandbox and get to work. Unfortunately, SL was being a pain and doing that thing where the edits weren't sticking to my prims immediately. That is SO annoying. I finally finished my little project, though. Not a belt this time, but some big oversized legwarmers! 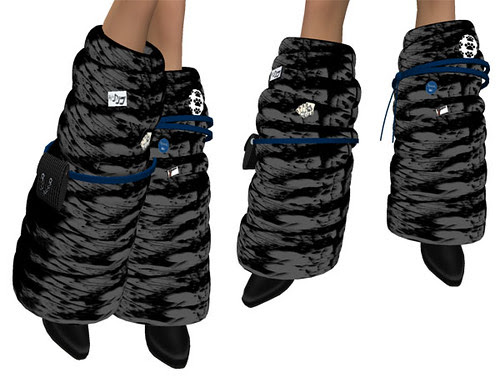 I put some "pins" on them, a ribbon on the left one, and a pouch on the right one. I'm actually pretty pleased with them. :) I didn't plan on putting them in the store for sale, they were more of a "creative building" project just to get my juices flowing again. I do that once in a while just to get my inspiration back. But I don't know, I think I might put them up. I'll leave it up to you guys. :) Tell me if I should or not.

Oh, and I finally hit up Skin Fair. Um....I wasn't really impressed. I mean, I'm always impressed when people make skins. I've played with the Eloh skins and I know it's awfully hard to get skins that look good. But just in general, I wasn't impressed with the fair. It was nice to see some designers I'd never heard of before, and I did pick up some nice freebies. But I don't know, I guess I expected it to be bigger. Plus, when I got home to try on demos, it's VERY obvious that some of these designers pull body parts off the same websites like 3D.SK. I tried on 2 demos from 2 different designers, but yet they both had the same nipples. Now I know they weren't copies of each other, so I'm most definitely not accusing either of them of ripping off each other, but the nipples were exactly the same. I don't have a problem with designers piecing together skins instead of hand-drawing them at all, but for goodness sake, if you can't match skin tones when you're putting pieces together, don't charge $1000L for your skin. LOL That's just ridiculous. But yeah, Skin Fair. I'm glad I went because there are a couple of stores that I didn't know about that I'll be going to check out, but all in all, not impressed.

Posted by Alicia Chenaux at 2:11 AM

Hey Ali, I'm so excited that our packs are ready!

It's mostly selfish I know, instead of spending my evenings dragging new players to 10 different places helping them put together a "look" that expresses what they want to project (for free no less) or bombarding them with questions like "What color hair" and "What style of clothes", I can just show them the pictures and they can pick one.

They will certainly need to beef up their inventories, but who doesn't :P

At least now they can hit the freebie market with a complete look whether they want to be the girl next door or a fairy princess.

/me looks carefully for a slurl to your store...

I am constantly amazed at the prices people will put on skins that are frequently for one reason or another undeserving of that price. There *are* skins I will shell out for, others, not so much.

And we had a blast last night :)

Cen - Oh I know. It's much easier to point to a box and say "What do you like?" rather than drag out answers when the answer may be something like "Gay" to the question of "Do you want to be male or female?" LOL

Casius - I'll give the SLurl out when I'm ready to open. :) A few people have been by already, but usually by accident.

Sid - There are definitely many skins that deserve to have a higher price tag put on them. But when I try on a skin that has been obviously pieced together and nothing matches, all I want to do is find the designer and slap them for trying to charge people $1500L for one. :-p

Of all the hours I've spent helping new players I must admit the other night was the first time I've had to ask "Do you want to be male or female?" and the answer given was not helpful in the least.

I am so excited to add your shop to my "Welcome to SL" note card that I hand to noobies. (I do tell them how to find it in their inventory and open it before I run off.) The avatar kits are a great idea!!