Second - This right here has got to stop. I'm serious! Yes, it's after Easter, you can wear your white shoes, but not like this. 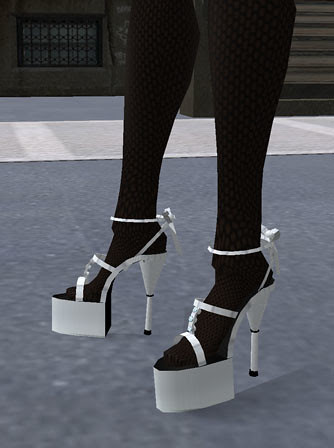 Yeah, the shoes bling. So not good.

I dragged my new friend Levi out to Primtionary tonight. I love making people go play with me. LOL Not that either of us guessed anything. But we were cute and our outfits matched, so you know, that makes up for not guessing. Did I mention that I met the gorgeous GoSpeed Racer at Primtionary the other day? It's THE place to be, people!!

After the game, Levi took me to the coolest place! It was just this big crazy island full of colors and prims and stuff! 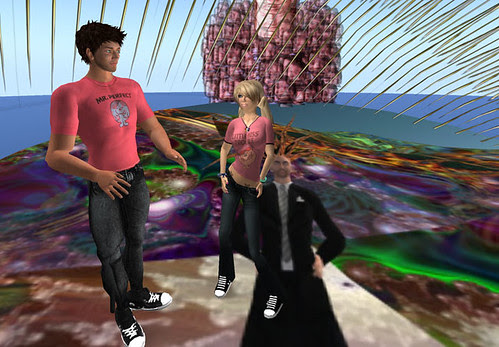 Ok, where we were standing was neat because if you walk over the side JUST right, you do some CRAZY bouncing through the air and then land back in the same place!! I only managed to do it right once. The other times I landed flat on my face. But I did manage a cool shot while I was flying through the air. 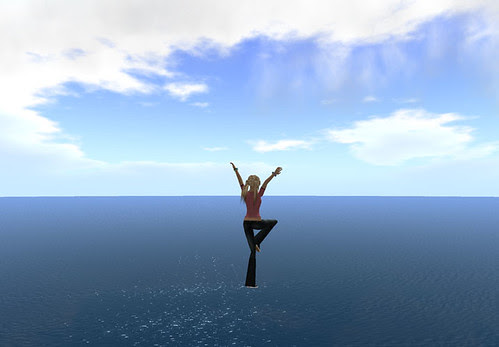 There was also this elevator thing that took us under the sea. It was really neat with all kinds of fish. We ended up hopping a ride on one of the smaller sharks and talking while we went round and round and round. This was one of the better shots that I got, since from the way we were sitting, I was half in his kidney and his arm was shooting through my stomach. LOL Gotta love SL sometimes. 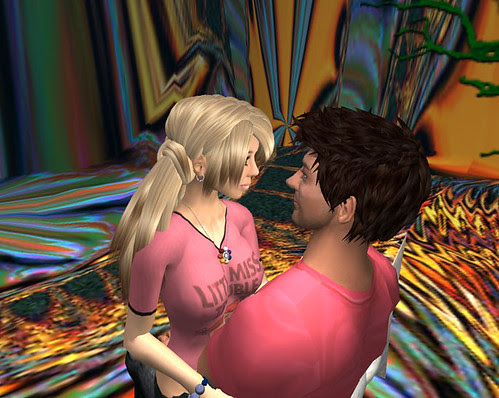 Tons of fun! I love when people can show me awesome crazy places like this. I don't always get a chance to see a lot of places just because I'm at the club, or at my store, or shopping. There are just so many places out there that people have put together and they hardly get explored. I want to see all of them!!

I think I'm going to call it an early night and head to bed. I bought the book "Snow Crash" today, which apparently was the inspiration for SL and other things like SL. I'm not a big sci-fi reader, but supposedly it's good, so I guess we'll see.

I'm interested in Primtionary, what is the SLurl for it? I've been reading this blog a bit the past couple of days and really enjoying it. I've only been in SL about a month less time than you, and I'm super short too so we have some stuff in common.

Now to comment on the post...ppssssstttt is Levi the guy you want to mack?
Should I have Jerremy slip him a pack of SLondoms? (copyright/branding be damned! the horses left the barn about 4 years ago)

I'll restrain myself and not comment on the matching outfits :)

Now regarding the white blinging open toe shoes and black stockings, as you know we've been seeing this on a weekly basis, and not in the same places or the same avatars.

Maybe it's a new fashion trend and I'm not hip enough to know about it? Or maybe the theory is that the contrast better shows off the shoes? I"m trying really hard to come up with a theory on this one.

Aisuru - You can use the coordinates that Tymmerie gave, or IM me in-world and I'll drop a landmark on you. :)

Cen - Well you know, I did some google searching on the shoe matter, and people generally scream that you can't be wearing white shoes with black stockings or black outfits. So it's not that I think we're not hip...it's that I think we might have taste. Maybe I should write to Manolo the Shoe Blogger and ask him if this is an upcoming trend.