This will probably be a quick "here's some pictures ok see ya" post because it's late and I'm really tired and I actually planned on going to bed about 2 hours ago. Sometimes, people just don't let you say goodnight right away. lol

I got to hang out with someone who reads my blog today. Hi Layne! She's the friend of my friend Doc, which is funny since she already knew all about me before he even mentioned my name to her.

So Dove Swanson of Long Awkward Pose and Laynie Link of LaynieWear have collaborated and they came up with some prop poses. I had the chance to go out and give them a try. They're SO FREAKING CUTE!! If you do a lot of photography, you should really go get these because it's a lot more interesting than just the run of the mill posing on a background thing. Check out a couple of shots I took. Excuse my clothes. Lately I've been a slob. 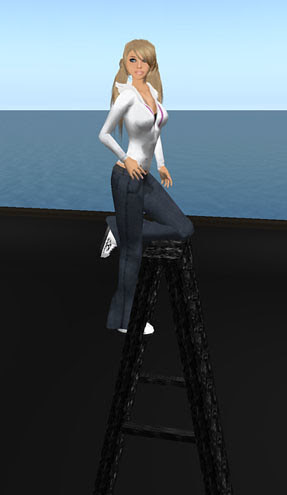 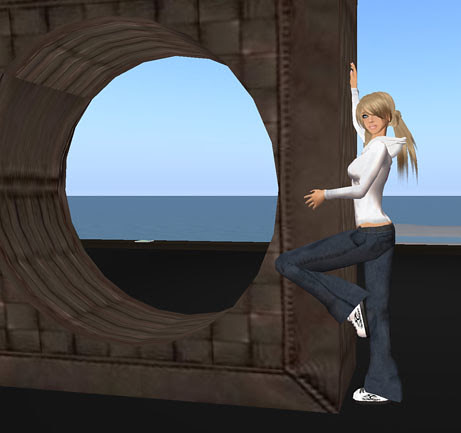 LAP is probably my number one favorite store for buying poses, especially couple/group poses. We have some over at The Viper Pit that Cen and I have bought and we just love them. :)

So I got to break in our new and improved and way too big for its own good club tonight. :) Seriously, it's great. Lots of room to dance and just so cool. The funniest part of the night was screaming "Straight ahead and go up the fire escape!" to everyone who teleported in. A tp thing will be put in place soon to make the journey easier up to the club, but I was all for hiring a newbie to wear a wagon or rickshaw and take people to the stairs. C'mon... $50L for 2 hours? Better than camping!! Here are a couple of shots. First one is of the club from one view. The event was "WTF Are You Wearing," so yes, that's me in the gogo skirt, pink socks, platforms, and wild hair. lol The second is just a cute shot of Niki and Dade, since Dade decided to be a tiger. 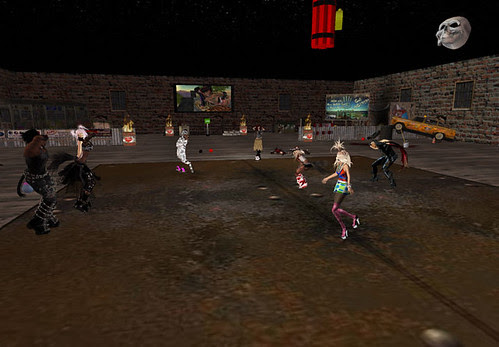 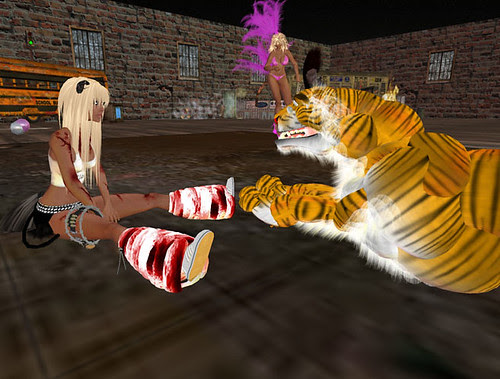 After the event, I went to my store and ended up chatting for ages with people. At the end of the night, it was just Sam, ZZ, and me standing outside and Sam ... Ok, well, he's out of town right now but using a wireless connection which isn't all that stable. He was having some lag and some freezes and somehow in the middle of one of his freezes, he took the ground out in front of my store. Oh my, it was SO funny! One minute we're standing there, the next we're underwater! 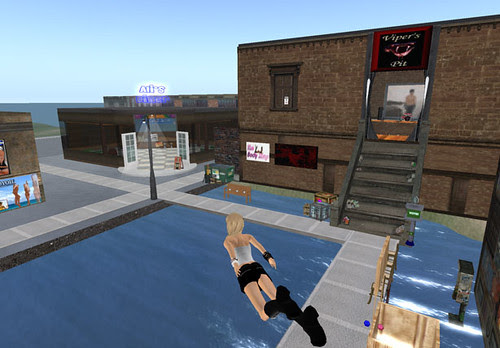 It's all fixed now, but I was rolling with laughter!

Of course, I'm also exceptionally tired and I'm sure anything would have set me off since I tend to get stupidly silly when I need sleep. So it's off to bed.

Posted by Alicia Chenaux at 3:12 AM

Hiya. It was very nice to finally meet ya. Hope to hang out again soon. =)
P.s That was such a cute dance y'all were doing.

OMG you drowned Sam - I don't think he has a swim animation!

He drowned himself! LMAO

And where ARE YOUUUUU????