I've deviated a lot lately from my original $5L a day plan, so it's time to go back to basics. My inventory would probably also thank me. Not that I won't still treat myself once in a while, but I don't really have to hit EVERY sale. I did go to the WRONG Crazy sale yesterday and picked up a couple of great outfits, with boots, for $49L each. Not too shabby there!

Just as a disclaimer, the rest of this post is OPINION ONLY. It's not intended to offend anyone or their fashion tastes. This is just what I think, and how much is that worth anyway? :)

So today I decided to see the other side of the SL fashion coin. I went to Stiletto Moody, the SL equivalent of Christian Louboutin. Shoes, for those of you scratching your head. Unbelievably expensive shoes. A plain pair of Louboutin pumps will usually run you over $500 USD. For something that only goes on your feet and will probably end up scratched up, I wouldn't shell out the money for a pair.

Stiletto Moody is about the same, in my opinion. Imagine my surprise when I walked in and saw these right away. 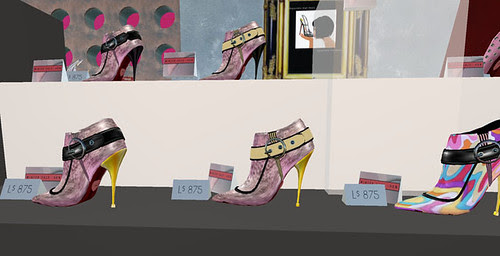 Are you kidding? Not that they don't look well made, but $875L?? For those?? Even if I had unlimited $L, I don't think that I'd spend that much on a single pair of loud ankle boots.

[I guess I should note that there was a group sale going on. 40% off if you wore your group tag, taking those boots down to a still very pricy $525L.]

There were no demos that I could see in the store, which I completely dislike. If you're going to charge THAT much for some shoes, you better have a demo for people to try on!

[EDIT: Thanks to the lovely Sidonie, I was made aware that there IS the option for getting a demo. However, when I went back to check it out, there aren't actually any demos available yet.]

A lot of the shoes at this store are also very flashy. 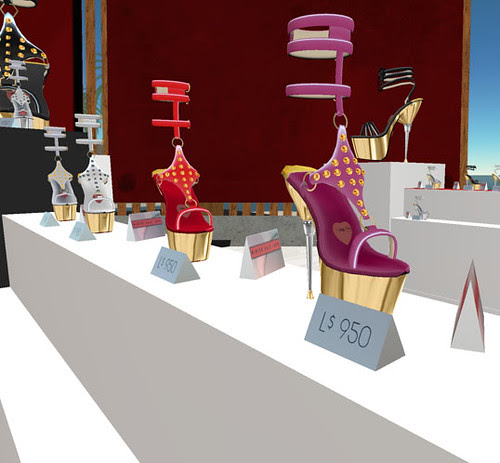 The thing that got me about the whole store is that I was looking around and almost every shoe struck me as one that an escort or stripper would wear. But maybe that's because I saw two girls who looked like this standing there? 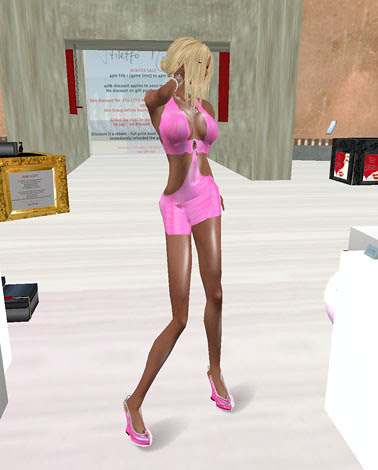 That's a store I probably will never go into again. No offense meant to the creator of the shoe, because as far as sculpty work goes, it's very well done. Just not my style, and most DEFINITELY out of my budget.
Posted by Alicia Chenaux at 1:58 PM

Since I bought some at the sale, lol, I'll just say that 525L for a pair of really good shoes is not out of the way. Minx Shoes sells from 500 and up for example. Zhao shoes sells for about 400L except for boots. Tesla is around 350 and up depending on style. Enkythings is also in that area. Adam n Eve is usually aroudn 250 to 300. Can you tell I like shoes?

I couldn't and wouldn't spend full price for Stiletto Moody shoes but the sale price is commensurate so I had no problem with that. Also, they do provide demos but you have to click the vendor to get them which without a sign saying this is how you get demos, is kind of odd.

FWIW, I really do think these are some of the best shoes I've purchased to date.

PS, I think the store touts the shoes as being Fetishy. And yes some of them are specifically for strippers as the description even references dance poles.

Strippers, by the way, are some of the biggest buyers of Manolo Blahnik and Christian Laboutin shoes irl. Their salaries including tips can be huuuuge.

Can you tell I'm exceedingly cheap? :) You'll have to show me your shoes! Or I'll have to go back and figure out how to get the demo. Gosh, just put out a prim that says "Demo."

Maybe I haven't done much shoe shopping in SL, because most of the shoes I have are ones I've gotten free or in packs, and any footwear I've actually spent money on has been on boots, which I know are more expensive.

LOL, I can be cheap about some things too. It's all relative and you know I like ze freebie as much as anyone AND I like sales. So there you go.

I will happily show you my shoes, lol

A dear friend was very generous and bought me a pair as a Christmas gift. I SLove them.

Ooh, that is a generous friend! I think if I spent that much, it would have to be just for me. LOL

I love the Stiletto Moody strappy platform heels, and when the sale was announced I threw on my group tag, raced over and got the rest of the ones I wanted. But after finding out that Stiletto Moody isn't the actual creator, and instead pays someone else to make the shoes and then sells them under her name, I'm a little turned off to even buying the shoes at 40%, even if they are some of the best-looking shoes I own. :-/

Wow Meara, I didn't know that. Of course, I don't have a lot of knowledge of high SL fashion. :) Stiletto Moody was in the store today when I was in there trying to get demos, and I almost IMed her to praise her sculpty skills.

An earlier poster stated that, "Strippers, by the way, are some of the biggest buyers of Manolo Blahnik and Christian Laboutin [sic] shoes irl."

You might be surprised to note that while Louboutin started out making shoes that make a woman sexy,in no way are his designs made specifically for strippers. At an average of $650 to $1500, they aren't shoes to show up on just anyone's foot. Watch the next red carpet event or check out any celebrity's foot the next time you see one...you'll see plenty of Louboutins, but I doubt you'll see many strippers.

As to Manolo Blahnik, I'm sure he would smile and quietly take your remark in stride, as he a most gracious man with a quite pleasant demeanor. His shoes are worn by the fashionable women who like style along with comfort, and who wouldn't be caught dead near a dance pole. By the way, his shoes run an average of $700 and up.

Perhaps you were thinking more along the lines of "Kinky Boots" for your desired lines--although those are for men...?

Those are some ugly shoes. I'm having a hard time spending 500L on boots I know I'd wear all the time much less spending nearly 1000L for those.

They look like shoes that are trying to be classy.

The beauty of SL is that there is choice. I do spend a massive amount of time on design, to get the exact right curve of the heel, swoop of the sole, and a myriad of other things largely invisible to the consumer. I do this to make it the best that we can for SL, and work tirelessly with 3d technicians to get just the model right first.

We have stated our intention to put out our SM diffusion line a less expensive non-scripted range of shoes which some have requested and we will have something for everyone. It's simply a resource matter and we are building the commerce platform to offer this in due course. But Stiletto Moody does represent the top end of the market and I hope you understand the effort that goes into producing them. I guess the negative comments seem to make blog news more readily than the thousands of happy SM customers who make some of our simple and elegant heels so popular. So I am surprised that you don't mention the understated elegance and simplicity of our popular patent leather pumps. A studded version reflects the current rage in the real world. Our all-black ankle boot, which was not pictured, is clean and not brash, while our 'Elegant Slingback" in rose gold is haute couture personified. Yes some of our platform shoes have a splash of fetish and a dose of imagination but that is what we love about SL. Stiletto Moody women wear shoes that can indulge their appetite for a cocktail party, a wild night out, or a playful girl moody, as personified in the the premiere shoe-blog site http://yourtoes.blogspot.com/2008/01/love-and-lust-stiletto-moody-spring.html

In the end i applaud all of you. Your opinions are valuable because in the I am a shoe lover who makes these shoe for you. I am impressed by your lack of rudeness - all of you in this thread - and so i return to the design studio enthused with the promise of a most exciting SPRING/SUMMER range next.

PS Sidonie of "I really do think these are some of the best shoes i have purchase to date" - you rock our world.

Wow... the shoes you pictured did looked like what an escort would wear! Even tho they are really well made, I prefer the shoes at Tesla or at SSUS, they are much cuter. By the way, your blog is great.