Wow, you guys REALLY came through for me on the dresses question! I got more suggestions and landmarks than I knew what to do with! :) But I totally loved it, and I did end up picking up a few cute things today and I have tons more places to check out. I also got more ideas today for belts. You guys are really keeping me hopping! ;-) Tomorrow I'm dedicating at least 2 hours during the day to just building. That does sound like a long time to just sit and build, but the Bad Girl belt took about 3 hours, so really it's not that much time at all and I'll probably end up building longer since that's the way it seems to go once I really get into it. The host belt WILL be finished tomorrow. I want to have it ready to wear by the time I host my event at 7. I'm not DJing it, just hosting. At least, that's the plan. You never know what will happen. :)

So Cen and I went out to La Reina tonight to check out some poseballs she'd seen because I wanted to know who made them. Did you guys know that the poses from Demoiselles are no longer $1L a pack? I am soooooo glad that I picked up all of them back when they were!! But the store has moved from the little stall to a big store, and there was a Sine Wave stripper pole in it. Of course we tried it out. 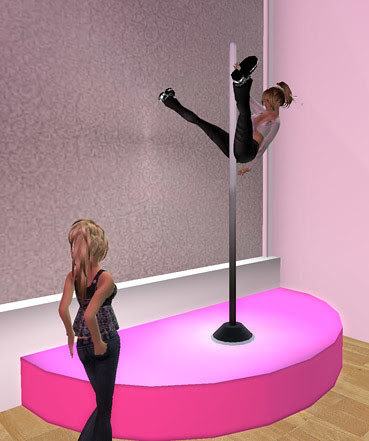 Sorry, I didn't take a picture of me working the pole. But as you can see, Cen is winding and grinding up on that pole. :-p We'd be the best strippers ever.

After she left, I went to my shop to try to do some stuff. It didn't work and I ended up going to <3Cupcakes to check out the new skins. They're very very pretty!! As I've mentioned before, my primary skin was one I picked up from there. The new skins are more expensive than mine was since, well, they're new, but I may end up getting one eventually. I'm still really partial to mine, though.

I also wandered into a store called Soap [SLurl], which sells accessories and some clothes and other stuff. It's a pretty cool place. It even has Twister!! 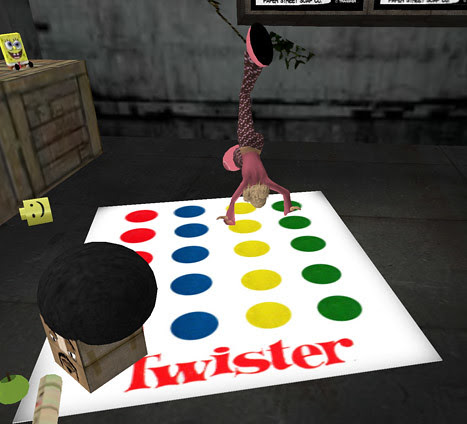 But the best thing EVER? OMG. Ok, I don't often go nuts over some little thing I've seen in SL. I LIKE a whole lot of stuff, but it takes something truly fab for me to gasp out loud and yell "I NEED THAT!" In fact, Mr. Kitty can testify that I woke him up with my exclamation tonight. Check it out. 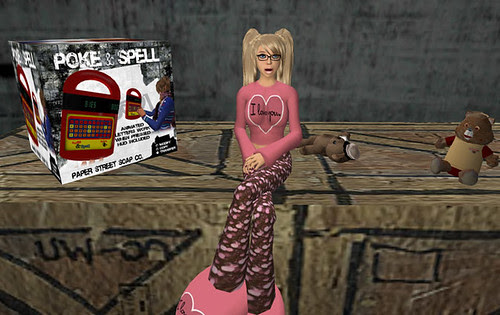 That is a Speak & Spell!!! Ok, so it's called a Poke & Spell, but you know damn well what it is. That was my FAVORITE toy when I was a child! Man, I wore my Speak & Spell OUT. I would have bought it tonight, but I'm going to wait until I have a bad day, and then hop over to get it because I know it'll make me smile. And yes, that is a Teddy Ruxpin on the other side of me! 80s Heaven!

So I was checking my Google Analytics tonight, since I haven't in a while. I have reached over 10,000 page views and over 6,000 visits. That's pretty shocking to me since I really haven't advertised this blog, and well...it's just me. LOL I also had to laugh because someone searched "what i need for making barrettes" and ended up on my bush barrette page. Oh that's so sad. But big thanks to SL Free*Style, Tymmerie, Are We Not Men, Sidonie, Wrath, and Calaya, because I get the most hits because of your blogs. Thank you ever so much for adding me to your blog links!

You know, I started blogging just to give myself something to do. I never dreamed that it would lead to some of the best times and experiences ever due to the people that I've been lucky enough to meet because of this blog. I actually didn't think it would last. For those of you who have been long time readers, you know that there were days when I was lonely and unhappy in SL. I considered leaving several times. I can honestly say now that there is no way in the world I could ever be lonely in SL again because you all won't LET me be! The random IMs just to say hi, the "Hey, come here and look at this!" teleports, the encouragement and support for whatever I am doing... Well, at the risk of getting all girly mushy, I just want to thank you all so much. There are many times when I am quiet, and many times I don't say all that I should, but just know that I am appreciative of each and every one of you. :) [Some more than others, but they know who they are. Or they should. :-p ]

But I really AM still wondering about the 2 visits I had from people searching "clitless girl."

Oh geez, I said I was going to bed early tonight. So much for that.

Posted by Alicia Chenaux at 2:35 AM

I ran right over and got the "Twister" game.

You're welcome Alicia! I'm glad you found some things that you liked. :)