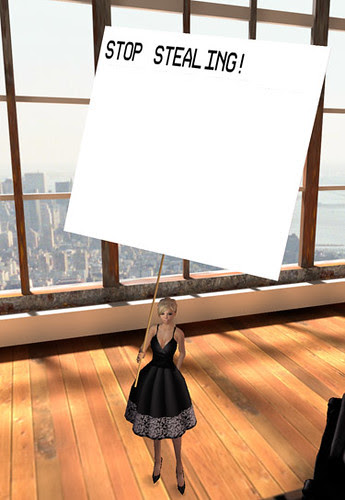 I woke up to find that yet another designer has had to put up a freebie because someone stole their design. This time it happened to Laynie Link of Layniewear [SLurl]. From what I read on the Freebie Finds In SL blog, this occurred because Laynie refused to take down her Autism Speaks kiosk. What the hell? That's the most ridiculous reason for stealing someone's dress that I've ever heard. Go pick up your Vanessa dress, and educate yourself on what is real and what is stolen.

You know, I love free items as much as the next person. I built most of my SL on finding where the best free things are. But I really hate when designers are forced to give away nice things, whether it's by them feeling like they have to, or if they do it because someone has stolen what is rightfully theirs. So yes, I now have this cute black dress that I probably wouldn't have bought otherwise [let's face it, how often do I go anywhere nice?], and I have my absolutely fabulous black heels from Maitreya that were given free this week, but I really hate that the designers pretty much had to do it.

Anyway, after all that, I hopped over to <3Cupcakes [SLurl] and picked up the dress that I've had my eye on for the past couple of days. <3Cupcakes is a sickness for me, I tells ya! 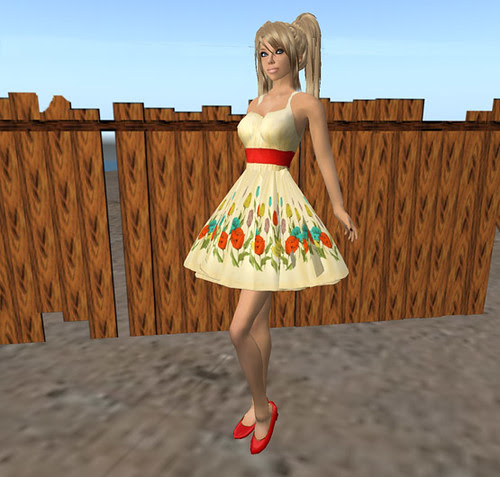 Isn't it just too adorable?! It was one of those dresses where I kept saying "I can't buy that. I already have people asking me if I'm a teen avatar. That's just too cute with the little flowers." But, the other side of me that was screaming "It's CUTE! BUY IT NOW! You have shoes that match!!!" won out. :)

I guess I better get up and get my day started so I can come home and get some work done before DJing tonight. Just so much to do. :) Have a lovely Saturday, everyone!

Posted by Alicia Chenaux at 8:09 AM

What could be a solution I wonder?
What if we organize a web-based database of ORIGINAL products, listing their creators and locations where people can buy ORIGINAL products? There would be a place to look... And it's doable. I can do it with my team in just a couple of days...
Regards.

It might not be a bad idea to put together a place that lists the items that are now being given for free because of theft, and the names of the thieves. Hmm...