If Mardi Gras means that you should party hard and have a great time, then we definitely had a fantastic Mardi Gras! I have a bunch of pictures to share and a lot to say, but I'm really exhausted so if I skip some details or I don't make sense...well, it's me. :) All the pictures will be sized small for this post, but you can just head over to my Flickr to see the full size.

Tonight Cen and I went to the sim of Amorepacific [SLurl] to check it out and load up on freebies. If you haven't heard of it before, Amorepacific is a real world company from Korea. The sim is kind of a lag fest for some reason, but there's loads of goodies like hair [for men & women], female skins and shapes, and female dresses and accessories. Go check it out, because it's pretty cool. Most of the things like the hair and skins you have to do a 5 minute camp for, but the chairs and animations are kind of fun, and 5 minutes is basically nothing.

After we camped for hairs and skins, and ran into one of my readers [Hi AE0!], we started trying things on and we both ended up liking one skin better than the others. So then we ended up being twins! We put on our clothes from Hexed [SLurl] that we got on FashCon Free Day and headed out to hit the town. First we stopped over to show Cen's boyfriend. We brought him to his knees. LOL 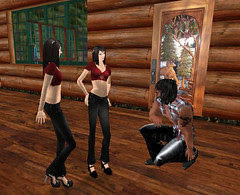 After we left their place, we decided to hit some clubs. But either we were party kryptonite or most clubs don't know how to actually host an event to get people to stick around, because everywhere we went, we were lucky to get a even a greeting. Oh well. 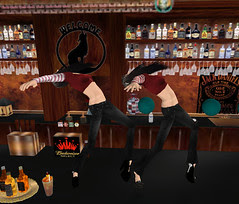 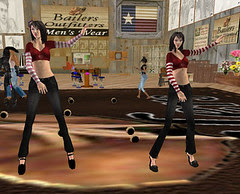 We were about to give up the whole party thing and just go shopping when we remembered that Rowan Carroll of She's So Unusual shoes [SLurl] was throwing a rooftop Mardi Gras party, complete with free dress, shoes, and masked skin. We headed over and WOW! Packed and we were immediately drawn in! 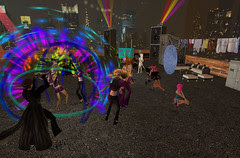 All I have to say is - Rowan Carroll can throw a party!!! If you missed it, you missed just the BEST time! The music, provided by DJ Autumn Heyse, had the party dancing its collective ass off! I believe DJ Summer Haas spun before we got there, but someone who was at the beginning of the party would have to confirm that. The party was star-studded with bloggers and designers and even a Linden was there. I've seen one, I've seen an oompa loompa! LOL!! We even ran into the lovely Sidonie, who invited us into her huddle and kept us sexy dancing. :)

Siyu Suen of Illusions [SLurl], who was as cute as can be and passed out some lovely beads to the crowd, Sai Pennell of Imperial Elegance [SLurl] and the blog Fashion Labyrinth, cute little steampowered dragon, Cogsworth Linden, and LOTS LOTS MORE! Oh if you missed this party, I don't know how you can't be kicking yourself. :)

Not only did Rowan have the free gifts [which will probably be up throughout Wednesday, so hurry over and get it now!], but she had a raffle ball going and so guess what? MORE PRIZES! Including free shoes! Tell me I wasn't in heaven! :) I haven't unpacked all my raffle prizes yet, but so far I've gotten 3 pairs of shoes and a box of sunglasses.

And now for some pictures!! 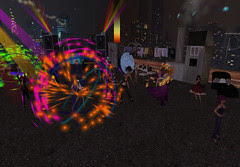 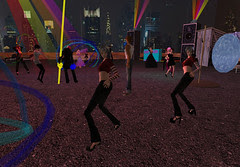 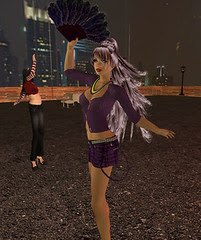 I'm the one with the pink striped sleeves, in case you're wondering. :) 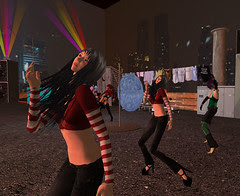 Siyu gettin' down to the music. 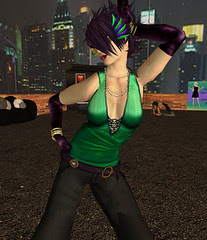 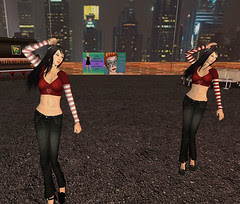 Luckiest n00b at the party. LOL 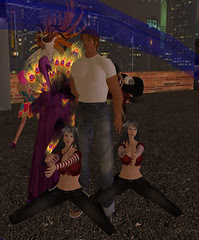 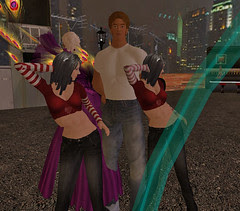 This guy got down with his bad self. 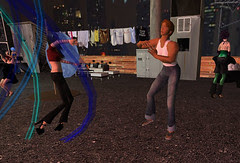 And of course, the hostess with the mostess, Rowan! 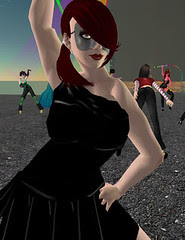 I took tons of pictures, but you know how it is when you're having a good time. You end up with a lot of crappy shots that make no sense. :) This party was EXACTLY what I needed this week. Big thank you to Rowan for throwing such a fabulous event. If you didn't make it this year...well, ya better be there next year!!
Posted by Alicia Chenaux at 2:19 AM

Let me guess - you guys are already planning your Cinco de Mayo celebrations? ;-)

Awwww. Thank you! I was having fun before the hottest twins in SL showed up, but I had a lot more after you two got there. Your pics are great and the post is wonderful. Thanks Rowan for a great party! And thank you Alicia for a great post.

I had forgotten about the newbie that landed on us and then started dancing. Hee Hee.

I can't believe it took a couple of hot twins like us so long to find a party but now I"m glad because it was well worth it.

Sidonie - I could hardly see you at first with your big awesome dance ball thing! :) But we're definitely all going to have to go out together more often.

Cen - When did you get to be the good twin?! LOL And omg, the light saber! I had to turn off particles here and there just to help my screaming computer, but wow. I loved that dancing newbie. Never said a word, just rocked out. LOL!

And Alicia, have I mentioned yet that I adore your music player? I'm currently rocking out to "Mr Jones." Haven't heard that song in far too long. <3