So I went ahead and downloaded the new Windlight viewer. I have to say, I like it. My screen is still fine, I'm not crashy, and things are looking good. To test it out, I went to the Tuscany sim. It's a very pretty place. There's a beach, and I think some shops, but I stayed higher up on the grassy part. Of course I had to dress up to go out there. :) 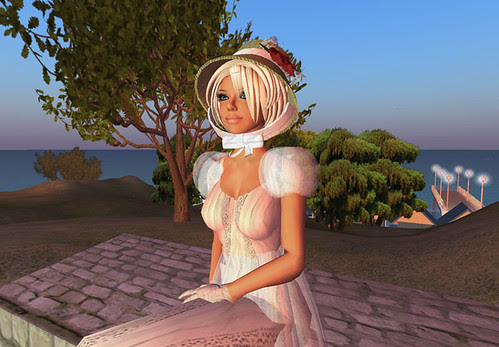 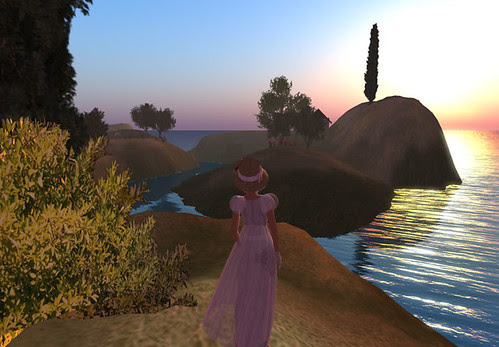 How cute is my peach basket hat? I'm wearing red shoes, too, but you can't see them. The thing I liked best about Windlight this time around, and it's probably been a feature forever and I never noticed, is the reflections in the water. It just gives things a little extra sparkle. I probably wouldn't have found it, but I decided before uninstalling my last version of SL to clean out EVERYTHING from the application data folder and all that. So when I installed Windlight, all of my previous settings were lost, which caused me to have to go into preferences, which then let me see all the neat settings for Windlight. :)

I even managed through a very crowded game of Primtionary using the new viewer. All in all, this version of Windlight - Not bad. :) Of course, I don't do much in SL but shop and sometimes build, so I don't know how it works for others.

Speaking of building, I headed back to the sandbox to keep working on my camera belt. It's still not done, but I got a little more done on it. 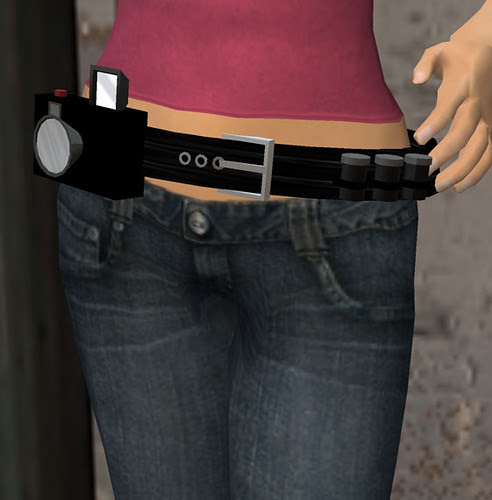 Wow, sorry for 2 posts of crotch shots in a row. At least I didn't have to use a barrette. But see, I've got the film canisters on there now, plus the buckle. The buckle needs work. Well, the whole thing needs work. But I like how it's coming along. Once I finally get it all completed, I'll be happy to pass it out to anyone who wants one.

Oh, by the way, Aden Breyer is now selling hair at the Tuli shop, and so everyone in the Tuli update group got free hair tonight. Join the group to get yours! I don't much care for the front of the hair [on me] but I'm wearing it because the back is just too adorable with a claw hairclip, and is very "me" because before I got my hair chopped off, it was my RL style. Well, still is, actually. But the hair that hangs out of my clips now isn't as long. :) I admit it, I went and bought another Aden style. Not on sale. I know, I know. :-p I did have the pleasure of running into Meara Deschanel. She's absolutely gorgeous! Just so put together. I'm just glad I didn't run into her while in my pajamas, or I would have been totally intimidated!

I wonder if I can go to bed early tonight. I'm thinking probably not.

Posted by Alicia Chenaux at 2:15 AM

Aww, you're too kind Alicia! It was such a nice surprise meeting you! And I'm glad you bought that Aden style - it looked so great on you! :)

I love the camera, but but but... who uses film canisters anymore? Aren't they extinct already?