It must be stopped!

There is a serious tragedy going on in SL. I don't know why it's happening, or what we can do to prevent it, but it must be stopped at all costs.

Gurl 6 is becoming a haven for badly dressed women.

The following snapshots were taken within the first 7 minutes I was in the store.

[Disclaimer: I don't mean to make it sound like I know everything about fashion and goodness knows I've made fashion mistakes. This is all opinion only, so don't get pissed off if you actually like an outfit and I don't.] 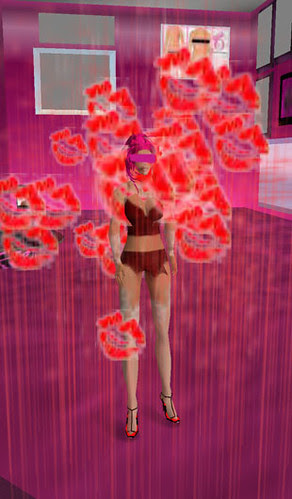 What is the reason for this? I think maybe she wants to be so covered in particles, no one can see her tacky outfit. The funniest thing is that she was talking to her friend and she said she couldn't tell if she liked the demo hair because it was pink. How she SAW the demo hair is a wonder. 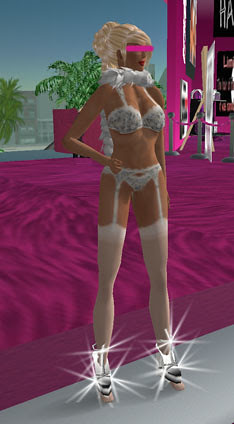 As if the fact that she's out in her underpants isn't bad enough [and you can't tell me she didn't do it deliberately, since she classed it up with a boa], this girl forgot to put her shoe base on. So her horrible blingy shoes are embedded in her ankles. With the spikes of her bling shooting out all over, someone call this girl an podiatrist, stat! 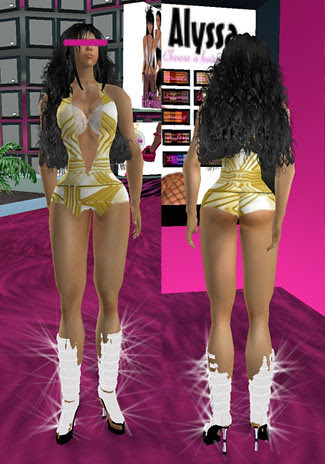 Again with the bling. It's really amazing I saw anything at all in the store, considering the amount of bling that was going on. I know that sometimes prims don't look right when you've scrolled out, so I got up close to this girl to see if her boots wouldn't fix. Nope. No deal. Her boots are stuck in her legs. Plus she forgot to zip her top and her shorts are a one way ticket to a UTI.

What is it about Gurl 6? Newbies under 30 days can get some free hair from there, and there is always some dollarbie hair and sales on specific hair going on. But that means that the store should be filled with women with bad fashion sense? Definitely not all the women there look crazy, I'm not saying that. But out of about a dozen women that were in the store, I saw 3 that weren't blinging like mad and had their butts decently covered. And I know how it is. I go out slobby sometimes, in sleep shorts and a big shirt. But wow! I just can't understand why most of the women in Gurl 6 don't know how to dress!

If anyone has any light to shed on this disturbing issue, I'd love to hear it.
Posted by Alicia Chenaux at 10:43 AM

Even after all this time I still have my WTF moments. Generally it has to be something , way way way over the top to make me look twice tho.

Tonight for example, I was in Cake lushing after a particular hairstyle I adore and yanno just sort of in my own world when, out of the corner of my eye I catch a rather odd poofer happening close by.

I cam out to have a look and not only is there the poofer girl in her oil slick skin and Camel toe shorts (no kidding they actually had TOE) but she's got two friends with her. The Amazing Amazon Bling girl (the bish had to be 8 feet tall) and the lil bling sisah, complete with weird HUGE affro and more bling than 50cent. You know I had to smile.. and think.. 'aww bless' kids these days.

But this photo I'm about to show you, defies all reason of santiy and brings me to my WTF!!!! point in so many ways I can't even begin to count.


But admit it, the first thing you said was WHAT THE F*CK!!

Oh my GOD. That's CRAZY! That HAS to be a joke because no one in their right mind would be wandering around looking like that and actually think that they look hot. LOL

You know, poofers usually don't bother me THAT much (unless I'm insanely laggy) but I keep seeing those smoochy-lip ones everywhere and they're REALLY starting to bug me. Does the poof need to be so big and thick that it literally clouds your screen with trashy red lipstick whenever the culprit TPs in?

Andria, I know what you mean! I've seen sooo many women lately with kissy lips and big fat hearts poofers lately. I got a dragonfly poofer and it lets one little cute dragonfly out every so often so that I don't appear to have a swarm of bugs in my hair. I can't imagine teleporting in somewhere and being knocked out with lips. I have enough trouble teleporting in and not crashing! :)