I'm not a regular user of Windlight. I like pictures when I see them that have been shot in Windlight, but usually I just use the Release Candidate viewer. But since a new version of Windlight came out tonight, I thought I'd check it out while strolling through Pillow Talk, since I want to buy some pillows. For the most part, everything looked really good to me. 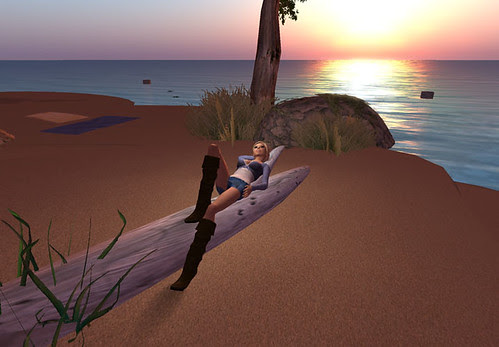 But then I went home [with no pillows, since I want to buy cuddle pillows too and I kind of need someone to go out there and test those with me], and was totally appalled! My awesome screen where I take a bunch of pics is icky looking! 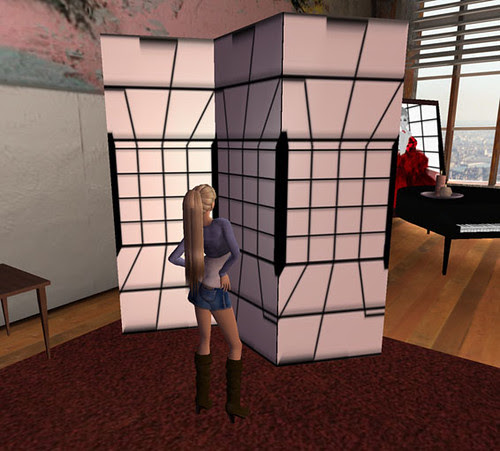 I waited and waited for it to rez or do something, but no. That really stinks! I cammed all over trying to see if it would fix, and finally I realized if I scroll out it'll go back to normal. But how often would I take a picture of myself in front of the screen at this height? 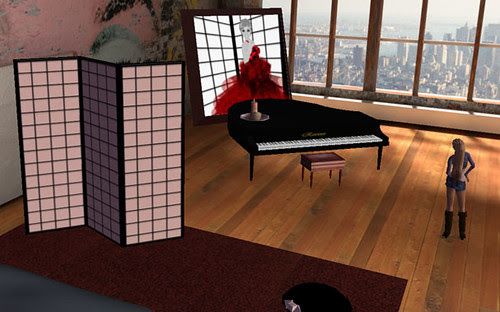 I hopped over to the blog post on the SL website to see if anyone else was having problems, and yes, they are. So I'll probably remove Windlight from my computer and stick with the Release Candidate.

On another subject - Those of you with blogs need to update more. :-p
Posted by Alicia Chenaux at 12:24 AM

argh windlight I know! I dunno if it happened to you but when I use windlight and cam around too fast I get all these super sharp pointy graphics sticking out of everywhere, and no way to fix it but to relog or flip to a higher resolution, it's a pain in the butt really lol....but I guess that's why it's in testing :p

nooooo!!! lol I don't want to hear that! Sounds like WindLight just keeps producing the same errors every other time they release an update - I am starting to find it hard to believe it will be any different once it hits the main viewer! And that will not make for a good SL experience. :-(

Calaya - I didn't get the sharp pointy graphics that I noticed. Outside, things looked pretty good, except for when I went on the roof of my skybox and it looked like my skybox was in the ocean. But indoors, things were crazy looking.

Wrath - I'm sorry! I know you love Windlight, but I wasn't going to rave about it when my fantastic screen looked like THAT. :-p

Alicia, every once in a while we all need a push to get the momentum going again. How about a good blogger meme to get everyone to freshen up their blogs? I am putting you in charge of this. /me looks to the side and whistles innocently, hoping you don't realize that I have no authority whatsoever anywhere in SL or in RL.

Tymmerie, you've done it now. I love quizzes and memes and stuff. :)