The bad thing about sleeping...

I've been giving the whole "cheap store" idea a lot of thought lately, especially since people have been so kind and have been encouraging me to do it. But as I mentioned to Zillion earlier, if I opened now, I'd have a half finished belt and a couple of chairs only to stick in it. :) So I think I have a lot of work to do to get some more items done. I have some furniture that I've done, a couple of bedroom sets and the Mint Chocolate living room furniture, but I want to do my own texture for the MC set. I'm actually trying to do my own textures for everything, but I'm NOT an artist. I guess we'll see how that goes. Since the items will be priced cheap, I guess it doesn't matter THAT much in the long run. I end up stretching and shrinking textures a lot anyway to get the look I want. I headed to the sandbox tonight to start work on another belt idea I had. So now instead of one unfinished belt, I have two. 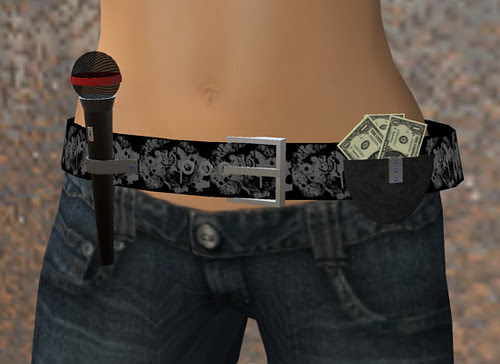 Introducing my hostess belt. I need to fix the pouch and dollars. The dollars are WAY too small. And I'm going to add a little cord on the microphone. I thought about making a bullhorn, but um...I'm just not that good. LOL I'm thinking the next belt [can you tell I love belts?] will be a shopping belt. Money, credit cards, a water bottle, a catalog or two, and a cell phone because you know sometimes when you're shopping hard, you have to call someone to send you more money. ;-)

After I was done building, I decided to head to Sine Wave to buy a dance for my chimera. I think it's time I start building it up. I love the dances we have in our club dance machine, but sometimes I want my own. 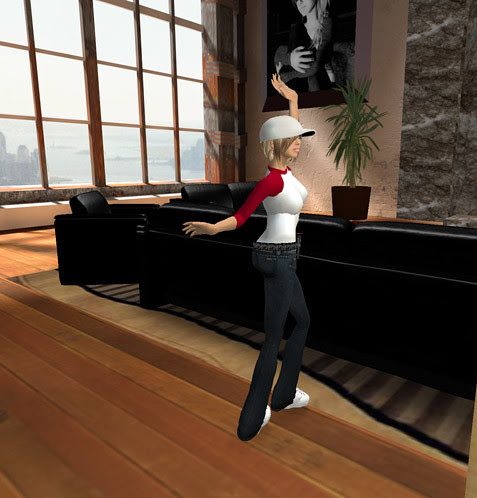 I ended up buying this totally bouncy happy dance. It's so incredibly cute!! I need more dances, though. I have a few freebies, but of course they're the same ones that are in all the freebie boxes. I keep wondering if there are other free dances out there that aren't in all the boxes. I'm going to have to research this, because you know, you could go completely and totally broke just buying dances at Sine Wave! Of course, they are great, so very much worth the price.

Oh, and I did a little friends list cleaning tonight. If I was on your list, and now I'm not, it's because you never talk to me. :-p But I don't think anyone I took off my list tonight reads over here anyway.

I really should try sleep. I need to go grocery shopping tomorrow and do some laundry. Real world chores...what a pain.
Posted by Alicia Chenaux at 1:56 AM