There are different kinds of blogs out in the SL world. There are, of course, the fashion blogs. Those people offer opinions [sometimes] on current fashion, show us what's new, and are basically "live" fashion magazines. There are the blogs that are more topical, such as Are We Not Men, where they actually think of something interesting to say and present it to us more as articles and not posts. Then there are the blogs like mine, the more personal blogs. We're the ones who run around SL, having adventures, and posting just whatever comes out of our fingertips. We tell you where we partied, what we saw, who was there, etc.

The problem with the personal blogs is that people begin to believe that they know us. In a way, that's true. But as those closer to me would tell you, there's a different side to me when we're just hanging out casually or being silly in IMs or goofing off in voice. I'd imagine that's the same for all of the bloggers.

What intrigues me is those people who start to believe that they truly know the bloggers. In a lot of ways, it reminds me of the obsession with celebrity gossip sites, such as TMZ or Perez Hilton. Have you ever read the comments to the posts on those sites? People get VERY involved in the lives of people they don't know.

I enjoy when people who read my blog say hi to me in the stores. I like when they IM me to tell me hello and talk about something I've written about. I've met my closest SL friends because of blogging. But today I kind of saw the dark side of being this open.

Not going into any specific details or naming names, I had logged off for a while today to go do some RL things, and when I came back to check something, I noticed I had an offline from someone who said she'd stopped by to see my new place. I thought it was kind of odd since I'd never said where I had moved to, and only one person had been over since I moved in. When I logged in, I checked this person's profile, and there was a picture of her in my apartment as one of her profile picks. The pick was set inside my apartment, so anyone could have teleported in from her profile.

After being incredibly shocked, I IMed her to ask her to remove it. [Which has been done, thank you.] But I felt amazingly violated. The only way I can figure that she found out where I lived was by looking at my groups. I know some people would say "It's just SL," but everyone is entitled to a certain amount of privacy, even in SL. If I wanted to just be out in the open, I'd still be living on a bench in the Isabel infohub.

I deliberated on what to do, and I decided as much as I loved that apartment and sim, I wasn't comfortable there anymore. So now I'm in a skybox on a land where I can ban people. Yay.

Anyway, my bad housing vibes rubbed off on Cen and the land where she and Rick had their home was sold out from under them and put up for sale. :( It sucks because for one, they had NO prior warning that the sim was up for sale. And two, they'd done SO much work on their land! Horrible. :(

Speaking of bad business, such a fuss today over stolen skins and other content. I understand and support the creators' rights, most definitely. But after attending one of the protests, I'm beginning to wonder if there's not a better way to get the point across. 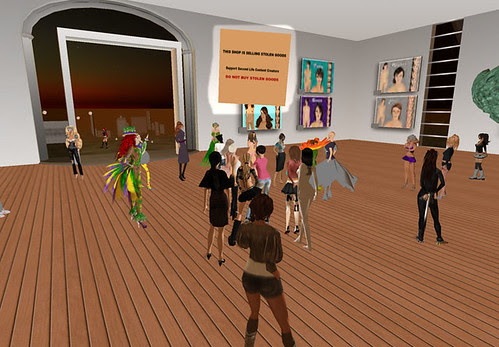 This is what the crowd was like right before Godzilla showed up, bubbles filled the place, and someone was running around with a wall. Later, there was a huge penis mountain, a bunch of girls running around in the protest skins, and a bunch of us were banned from the parcel. I went there to protest, not grief, although I don't think that this horrible seller deserves anything less. But it makes a legitimate cause look crazy when this much stuff is going on. Sometimes, quiet protest and educating others is the best medicine. Almost every stolen skin that I've come across in freebie packs has some kind of flaw to it. Learn what they are, and help the new people who may not be fashion blog readers to learn how to differentiate between a real skin and a stolen skin. Learn where the inexpensive but good original skins are so you can help people find them. Carry a few of the Another Shop skins with you for the new people you encounter. Urge the skin makers who have been hurt by this to file the DMCA and anything else that they can. Protesting is a good thing, but being completely crazy is not.

I chose not to visit the protest, there were strong hateful griefer vibes coming from people I saw talking about it. I’m all for protesting, wear a sign, wear a protest skin, bring your friends and hang out peacefully in the store. Even go to the jira page and vote on the issue. That’s the correct way to go about it.

PS
I LOVE your blog name, its such a fun word to say!

hey alicia! look on the info for your group and there is a box where you can choose to show or hide that group in your profile. ;)

I was going to comment about why on earth someone would set a "pick" in the middle of your living room.

Then I was going to comment about the protest and the differences between griefing and protesting, as it was my first I wasn't sure what to expect.

Unfortunately, seeing my land up for sale and having lost all privileges on it sidetracked me.

It was the kind of night that makes you wonder about SL and what it does to people. Is it just amplifying their RL (thiefs and shady business people) or are they super human beings in RL and just think this is a game where basic courtesies don't apply?

Adelia - I agree, we shouldn't stoop to their level. And as passionate as people are about this, it got ugly fast.

Chestnut - I found that option, thankfully. lol Now I only have a few of my groups listed in my profile. My rental group is NOT one of them! :)

Cen - I think the problem is that too many people think "Oh, it's just pixels." It's not always JUST pixels. There are actual people behind the avatar and we get our feelings hurt and we feel attached to our virtual things just the same as if we were standing face to face. I just wonder if that person who put your land up for sale would take it well if his real world home was suddenly sold out from under him.

Hi, i was that creapy spooky girl who stopped by your home in sl, after reading about it on your blog (hi!) i wanted to write you and tell you , i'm really sorry. i didnt mean to do any harm, and i didnt think about it but i never thought that people could cause so much harm that way (i've been brought up to make sure that what i do doesnt cause harm to anyone or create trouble, but sometimes i just forget and do not so smart things, not really thinking it through) anyway, i actualy found your place because your picture was of an apartment i was looking into my self a few weeks ago (house rent shopping, i found a sim that i really enjoyed being in. really peaceful, so i would visit every week or so, to look for vacentcy's). anyway, i'm really sorry for causing you so much trouble,or any trouble at all. it was really mean of me and i really didnt mean to, i'm really sorry.
i promice not to cause trouble and think before i act.
if anyone wants to know who to flame over this, it's nanukima runningbear - that not so bright girl.
all the best.

Nanukima - Thank you for apologizing. We'll just chalk it up to one big SL experience. :)