Ugh, what a NIGHT.

So as you all know, I've been living out at this New Orleans themed sim for the past few weeks. It's been lovely, with a nearby sandbox and stores and everything. The one semi-dim spot has been that there was a club near my home. But honestly, it wasn't a big deal until about 3 days ago when suddenly there was a LOT of shouting going on from the club. Shouting hello, shouting about tipping, shouting their emotes. It started to get really really really annoying. I made mention of it to my friend, who is one of the sim owners, and it was pretty much ok today until this evening.

I was hanging out with Wrath & Troll on my porch when the club owner, or one of them, or whatever, came over and started asking about the shouting. I said that yes, I did have a bit of a problem with it, but it wasn't very bad today at all. So he asks me why I moved to a sim that has live music and a club.

Um, because when I moved there, the hosts & dancers of the club weren't completely annoying and shouting to everything and everyone that happens to grace their radars?

I told him if he felt the need to shout, not to worry about it, I'd just move.

Now, I'll admit that when I said that, I didn't REALLY think I'd have to move. I mean, after all, I hadn't been outright bitchy about anything. I wasn't holding signs and marching up and down in front of the club screaming about how they suck. I hadn't even lodged a formal complaint! I had just told my friend that I was annoyed by the constant shouting, but since I was muting most everyone that was shouting anyway, it wasn't a huge deal. And isn't it good business to listen to the people who are renting on your land? How hard would it have been to just request to your employees to keep the shouting to a minimum? Or, just don't have residents! Most people who choose to have an SL home do so because they want a little peace and to get away from things for a bit. I work in a club, I know you have to be loud and excited. But we're up in the air, and we were also told by the club owners to keep the shouting to a minimum out of respect to the other people on the sim. Obviously respect was not an issue here, since there was none.

This club owner bought me out of my lease and took off like a bitch. So I packed up. 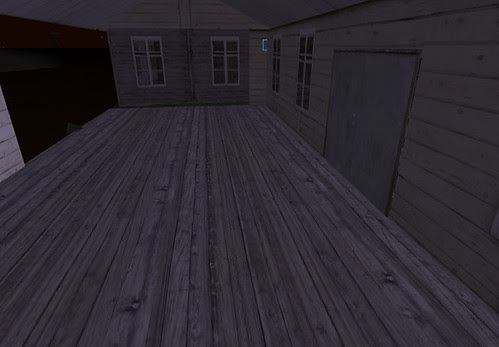 I am so lucky that I have the friends I have here, though. Within minutes Cen had me in a group so I could have a place to set as my home location, and Sam was telling me about some land he's renting out. I have a great SL family. :)

I'm not homeless, though. I went to a sim that I have absolutely adored for a while, but they never did have anything available. I lucked out today and rented the first floor of a small apartment building. It's more than twice what I was paying before [which wasn't that much. LOL] but it's pretty and it's mine and I'm away from that horrible club. 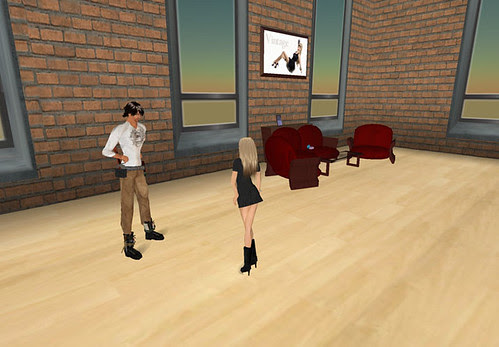 I'm redoing my furniture in a new color scheme [I had mostly white and baby blue at the cabin], and I have a few more prims to play with, so I might end up just making new furniture, or doing more decorating. I guess it depends on how long I plan on staying here. The area is lovely, though. There's a garden right across from the apartment building, and it's just quiet and nice.

My big problem now is that I keep asking myself if I was being unreasonable wanting the crazy shouting to stop or just not be so much. I don't THINK that I was. And I definitely wasn't a bitch about the whole thing. I just think it was extremely bad business what happened tonight. As far as building goes, the sim is great. But one bad apple spoils the bunch, and unfortunately for me, that bad apple was higher up on the tree. I'll be over it soon, I'm sure.
Posted by Alicia Chenaux at 11:48 PM

AWWWW!!! I can't believe all that crap happened so close to me and I never even knew it! I'm so sorry you left, but of all people I can understand why you did. To me this is peace and quiet at it's finest (LOL). Hope you can stop by sometime and get set on fire by a giant chicken again *wink*.

Hey, is that Wrath feelin' no Paine?!

Oh what a bummer Alicia!

It sounds like you are trying to look on the bright side - you got to see how great your friends really are and he bought you out of your lease. (I had a friend who after paying a month up front for an $8000/month condo complained that the radio that came with the condo didn't work and her landlord just kicked her out - no buy out, no refund.)

Good luck with everything and enjoy those extra prims!

Eliza - Oh, I'm sure I'll be coming around once in a while at least. You know, for giant chickens and all. LOL

Tym - Yeah, I was REALLY upset last night, but when it came down to it, I actually made money on the whole thing. LOL And I'm definitely enjoying the extra prims! :)

/me waves hello to Myg! I told Alicia that if she wanted, I could muster up the Topgol gang to make anti-shouting signs and march on the nearby club during their happy hour - after all, our protests against camping in Topgol got LL to ban all of gambling, right?
;-)

Thing is, there is NO NEED for that club to be shouting anyway - it's not such a big club that you can't hear people standing in the back (it's circular, anyway, so there is no back, lol).

Dude, I got to meet Troll - he is teh awesome! I should've taken pics, except I couldn't zoom my camera out far enough, heh.

That's how my evening goes though: stop by to see a cool New Orleans themed sim and steal a beer from Alicia's cooler - and in between spontaneous viewer crashes and neighbour disputes, she packs up everything including the cooler and moves. ;)

I guess I'm lucky you hadn't stolen more beers, because if you had, you'd have gotten all up in his face for me, huh? ;)

[Don't worry, I won't mention anything about the Dr. Pepper.]

zOMG is that THE WRATH PAINE that used to blog on AWNM?? Now I see what the deal is, he is out drinking with the ladies all the time...

I'd just like to say that I in no way whatsoever have anything to do with the fact that Wrath is slacking on blogging. In fact, I think I've told him to blog more. :-p

Ali you were an excellent renter and an amazing friend. You can IM me anytime and we can make fun of the bitch that screwed everything up with his goose stepping antics. (Not saying any names). Peace and hey Wrath!